Emma and I just got back from an amazing vacation on Washington's Olympic coast, capped off by an overnight stay in Unity, Oregon, two hours south of La Grande.

Why Unity, a microscopic sagebrush town in the middle of nowhere? 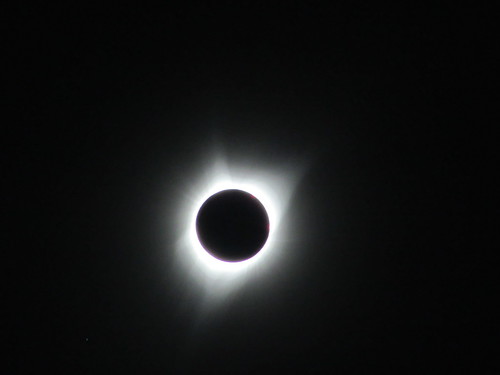 Oregon has been an eclipse-eclipse-eclipse madhouse for over a year.  So much hype, so much advertising, so many people planning to descend on the state.  Hotels in the path have literally been sold out for a year.

I feel very lucky that this celestial phenomenon happened so close to where I live.  A partial but very nearly complete eclipse would have been visible from my front porch, but I really wanted to see the totality.  I've seen total lunar eclipses several times, but never any sort of solar eclipse.  There have only been four total solar eclipses crossing North America during my lifetime, and none were remotely close to where I was living.

So Emma and I gave up an extra day at the rainforest and beach and trekked home on Saturday, then yesterday went two more hours south to Unity to be in the path of totality.

It wasn't nearly as much of a madhouse as I feared it would be. The campground (which until a couple months ago had been some guy's cow pasture... yes there were booby traps...) wasn't wall-to-wall rowdy people, and we didn't have any traffic at all on the way there.  On the way back, traffic was a little slow for about 20 miles north of Baker City, but that was only because there was construction and the highway was down to one lane.  I was glad that we only had to go as far as La Grande, though.  After we got home, I saw reports of the main highways north into Washington being clogged with stop and go traffic for miles and miles and miles.

As for the eclipse itself, well, it was amazing.  To actually see something like that is just incredible.

I really don't have big enough words to describe that feeling when it started getting darker and darker, and the birds stopped singing.  We watched the moon take a bite out of the sun, and then it was dark and the hazy mist of the corona was flaring out around the darkness of the moon.  I saw Jupiter, Mercury, Mars, and Venus.  I saw a solar prominence, a great gout of plasma erupting into space. Something I wasn't expecting, but which makes total sense, was that the air temperature dropped about 10 degrees during the height of the eclipse.  It was enough of a drop that I put my fleece jacket back on.  The the sun started coming back, and I saw the diamond-ring effect.  Then the birds started chirping again, and it started to warm up, and the moon glided away.

I sat there for the whole thing, from when the first wee little bite went out of the sun at 9:09 until it was completely whole again at 11:46.  For 2 minutes and 6 seconds in the middle, there was totality.

I can't even imagine what an eclipse must have been like to ancient people who didn't know what was going on.  I feel incredibly lucky to have seen it.
By Sue at 7:35 PM No comments:
in: camping and hiking, pretty scenery

Ribbons!  It won!  First place and Best of Show! 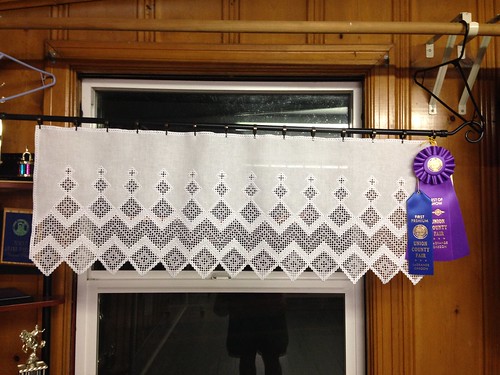 I love getting ribbons. 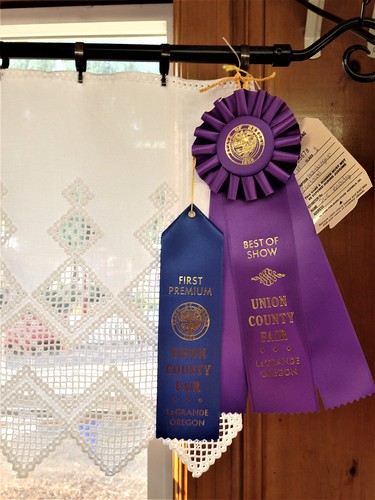