I am pleased to report that I have achieved one of my life goals. I have successfully taken a picture of a rattlesnake. 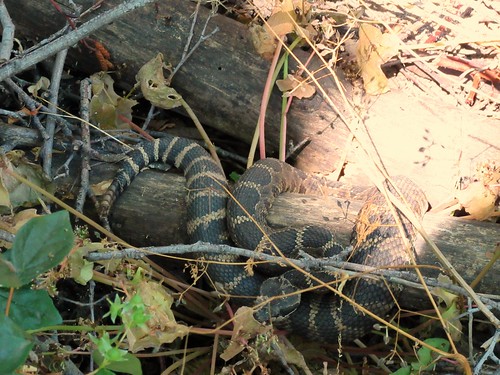 Strange goal, I know, but I have seen SO MANY rattlesnakes during the course of my job (and occasionally while hiking) and I have had no tangible proof of it up until yesterday. Usually I'm moving in the opposite direction too fast to stop and take a picture.

Yesterday, though, I was out in Gilliam County looking for wetlands along Rock Creek, and this two-and-a-half-foot long guy was hanging out on a log near the stream.

He was very calm and just sat there; didn't move at all or even rattle at me. So after my initial high-pitched yelp when I came around the tree trunk and almost stepped on him, I carefully backed up a long step, pulled out my camera, and snapped a picture. I still had the goosebumps from that visceral frisson of fear, but I had evidence at last!

Then I high-tailed it back to the other side of the stream, trying not to think about how there were likely plenty of his buddies scattered across the rest of the project area. I did scare up another big one from under a sage bush about 10 minutes later, but he rattled at me and coiled up... so I was moving too fast in the opposite direction to stop and take a picture.
By Sue at 10:37 PM 3 comments:
in: fauna

Good news!  The Haraella retrocalla in my glass globe terrarium is blooming! 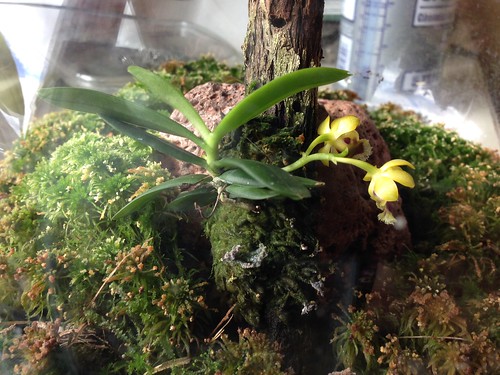 I got this plant in November, and it came with two little spikes started.  Neither of those survived the transition to my house, but in April it sent out a new spike. 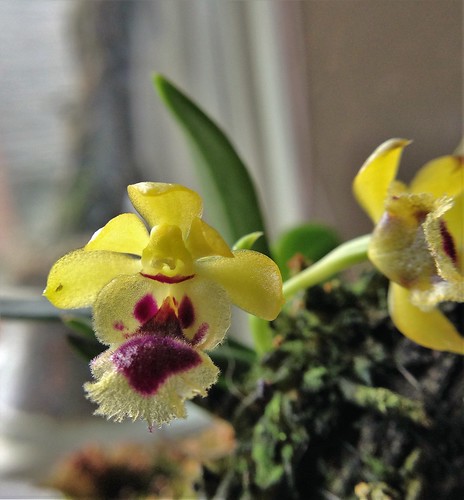 The flowers are so cute, about half an inch long.  Some plants of this species have lemony-scented flowers, but I haven't noticed it on mine yet. 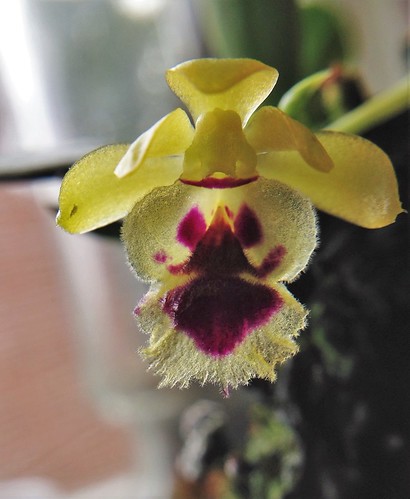 And finally, the last amaryllis for the year 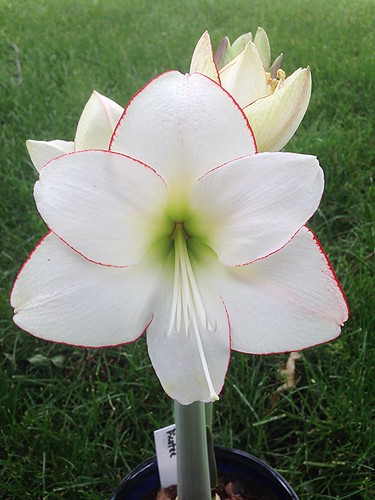 This is another new one to me this year, and is so pretty.  It's very elegant and tailored looking, with that fine line of red piping around all the edges. 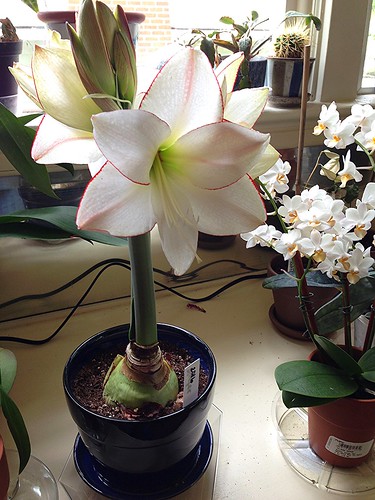 Three of the four buds on the first scape are open, and the second scape with four buds isn't far behind.  This is going to be another crowded bouquet, since the scapes are almost the same height.

It's nice to end the amaryllis display for the year on such a lovely note.  I have five other bulbs that didn't bloom this year, either because they were recuperating from apparently less-than-optimal care last year (two Red Lions), or were new to me this year and stressed from transit (Apple Blossom, Elvas, Green Dragon).  Hopefully they will have a great vacation outside over the summer to recuperate, grow lots of leaves and roots, and be ready to bloom next year.

So there it is, the full scope of my amaryllis collection.  Eighteen.  Yikes.  I had four bulbs last summer.

A total of thirteen bulbs bloomed for me this year, five didn't.  Four of the thirteen were mislabeled varieties, but I didn't already have them, so it's all good.  I had a total of 27 scapes, carrying a grand total of 108 flowers.

Except for two weeks at the end of January (between Minerva and Dancing Queen) I've had amaryllis flowers continuously since mid-January. The Picotee will probably last another two weeks or so, which means that I've had blooms for almost six months.

Amaryllis are so gratifying. 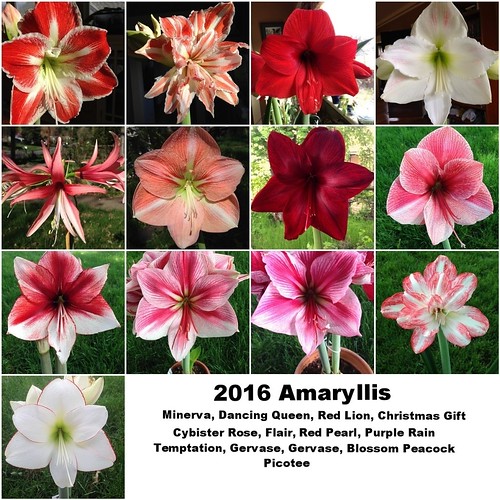 I was very excited that I had tomatoes appearing in June. Very, very excited. You got off to a nice warm start this summer, which was good for the tomatoes, so thank you.

However. That cold snap last week, with night time temperatures down into the low 30s and days in the 50s? No thank you, that is not the way to get tomatoes to ripen. Also, I had to close my bedroom window and put not only the quilt but the down comforter back on my bed, because I refuse to turn the furnace back on in June.

Plus, what was with the violent hailstorm last week, which ripped holes in my grape leaves, tomatoes, hostas, and the lovely giant delphinium I had bought two days prior? Not cool, Weather, not cool at all.

So it appears that you, Weather, are being flighty and capricious as per usual in eastern Oregon. I see that you are planning to warm up again over the next week or so. Please stick to that plan. I need a tomato.
By Sue at 4:45 PM No comments:

I am not to be trusted anywhere that sells plants. 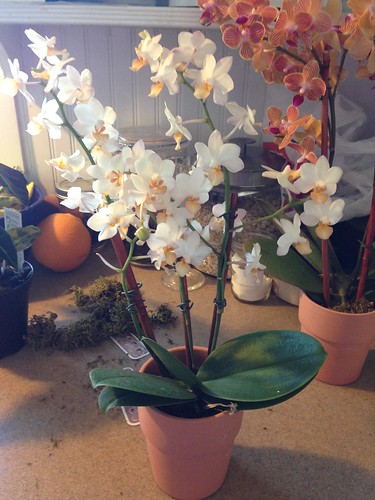 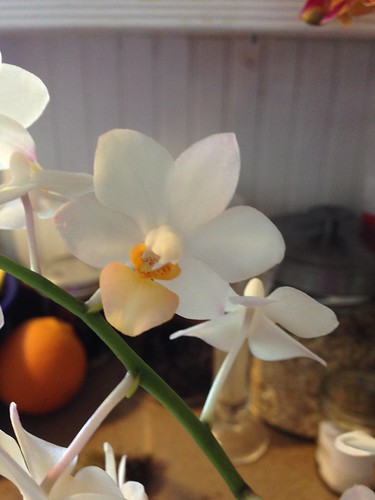 And this pretty orange stripy mini-phal is Dtps. Chingruey's Goldstaff. 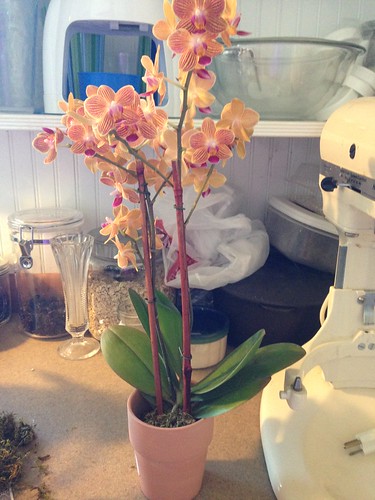 I couldn't decide which one was prettier, sooo.... 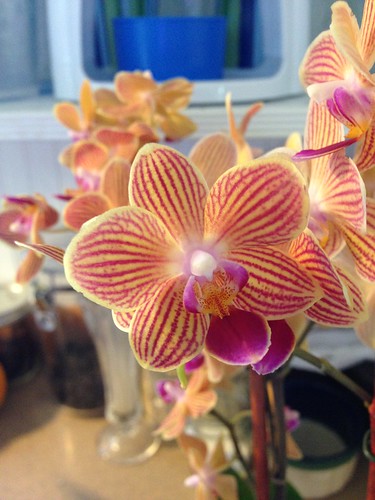 We went to the store for toilet paper and toothpaste, and somehow I ended up with two new orchids.  I don't even know how this happens.
By Sue at 9:19 PM 1 comment:
in: orchids

Very exciting!  The tiny Bulbophyllum moniliforme orchid in the 12x12x18 terrarium is growing! 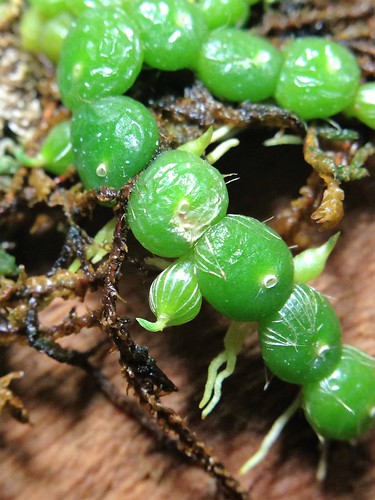 It has at least 18 new pseudobulbs forming, each with an itty bitty leaf.  Plus lots of new roots!
By Sue at 9:03 PM No comments:
in: orchids 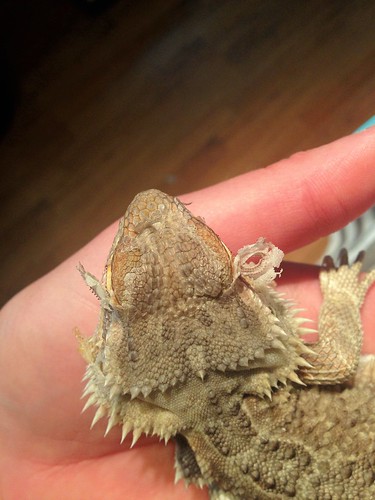 "What dat? Why my eyes fall off? Why my chin so itchy?" 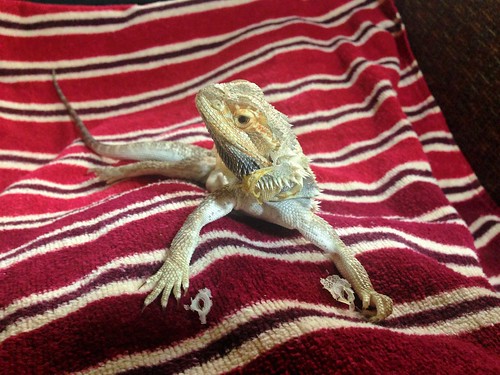 "Momma, I so uncomfortable." 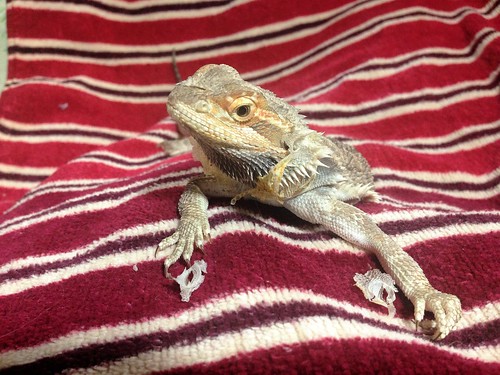 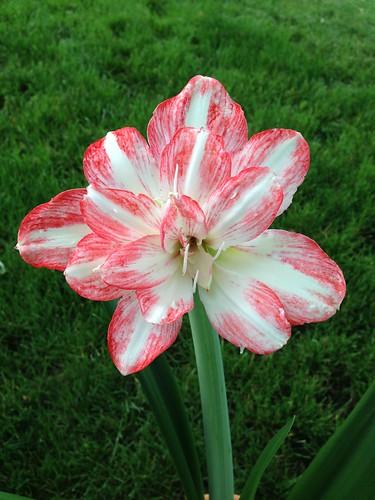 This is Blossom Peacock, and it is very pretty. Triple layers of petals, and as a bonus, it's fragrant!  It was sort of a medicinal fragrance at first, like a sweet menthol cough drop, but by the second day it was less menthol and more floral.

Tomatoes on the way!

Remember last year, when I waited F.O.R.E.V.E.R. to get tomatoes?  I didn't get the first ripe one until mid-July.

This year, though, I planned ahead better.  I started my seeds earlier, in mid-February instead of mid-April.  I'm a slacker, though.  I still haven't planted them in the ground, but hey, at least they got potted up into six inch pots. I was afraid to put them in the ground too early for fear of frost.  With the pots, I can bring them back inside if it gets too cold.  Yet here we are, with no danger of frost for at least the past couple weeks, and suddenly it's June.  How did that happen?

Anyway, today I noticed this... 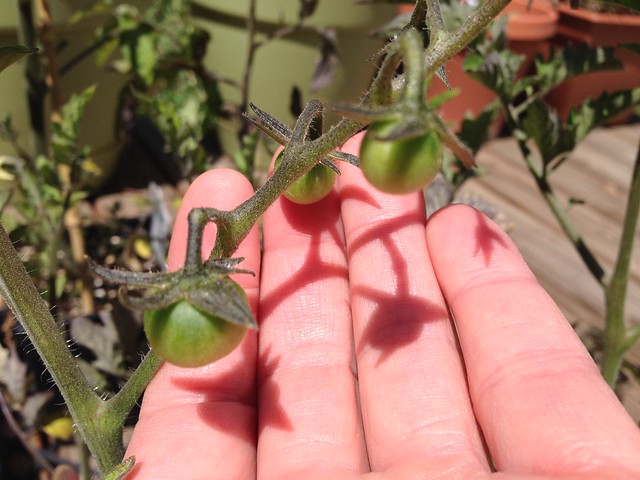 Three and a half months from seed to fruit.  I like it.
By Sue at 9:07 PM No comments:
in: garden
Newer Posts Older Posts Home
Subscribe to: Posts (Atom)