Update on the glass globe terrarium

Time for an update on the glass globe terrarium I started last November, because exciting things are happening! 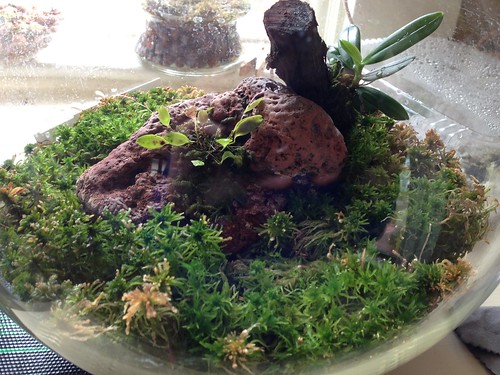 As you can see, everything is growing well, including the sphagnum.  To be honest, I wasn't really sure that the sphagnum would do much, because it's not a tropical species and would probably prefer to be outside.  But I guess since I keep my house cool in the winter (Emma says frigid...) it's doing OK.  We'll see what happens in the summer.

Anyway, both orchids are doing well.  The Haraella retrocalla is enjoying its stick and has put out a new leaf and several roots.  And the Lepanthopsis astrophora?  Well, look! 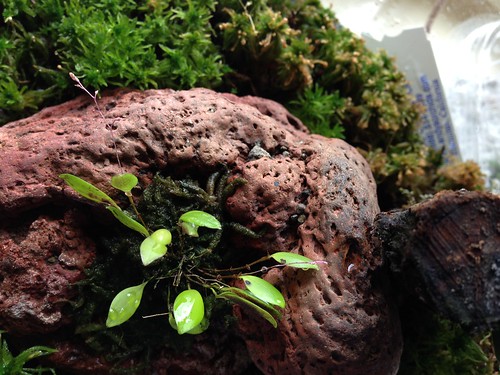 Not super visible because it's so tiny, but there are two spikes!  Here's one, 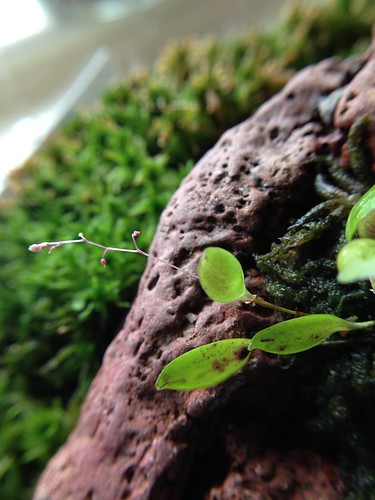 and here's the other! 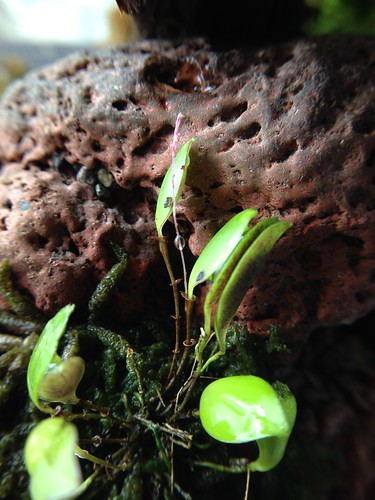 I didn't take a photo with a dime for scale, but the leaves are about half the size of my pinky nail and each spike is less than an inch long.

My second amaryllis of the season opened yesterday. 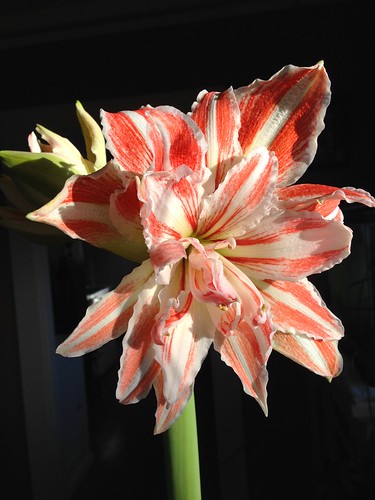 This is Aphrodite (Oops, nope, this was a mislabeled bulb.  It's actually Dancing Queen). It's new to me this year, and is the first double-flowered variety I have ever grown.  I like it!  Not as clean and elegant as a single-flowered variety, but very frothy.

There are three more buds on this scape, and I noticed last night that there's another scape starting to poke out of the bulb.  Should be a good long show!
By Sue at 5:33 PM No comments:
in: amaryllis

Skinny jeans.
I just don't understand them.
How are they possibly comfortable, or even remotely tolerable?
How do you even get your feet through the legs to put them on?
I am an un-hip old fuddy-duddy.
By Sue at 10:41 AM 1 comment:

It's about six months later than I intended, but I finally got around to bottling the tinctures/extracts I made last summer.  Part of the problem was that I didn't have any bottles, but mostly I was just lazy.

I ordered a case of 4-ounce cobalt glass bottles from Mountain Rose Herbs this week, and they arrived yesterday.  They're so pretty!  I tried to take a picture with the sun shining through them, but it ended up being mostly glare.  Still, I think you can get the effect.

The lemon verbena came out very nice, and is quite lemony.  The peppermint is good and strong.  The lavender is very, very, VERY strong, almost too strong to even taste.  I don't really know what I'm going to use the lavender for because it's so strong, but we'll see. It'll be interesting to see if a few drops in a recipe gives a non-overpowering lavender flavor.  It may have been better if I hadn't left the plant matter to infuse in the alcohol for six months...

I think the first experiment will be a batch of lemon verbena cookies next weekend. 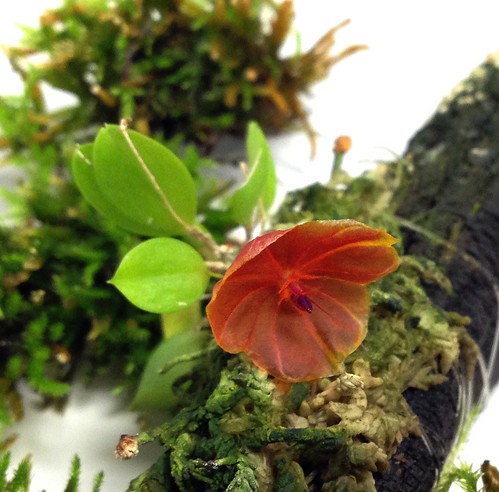 This is one of the coolest plants ever. 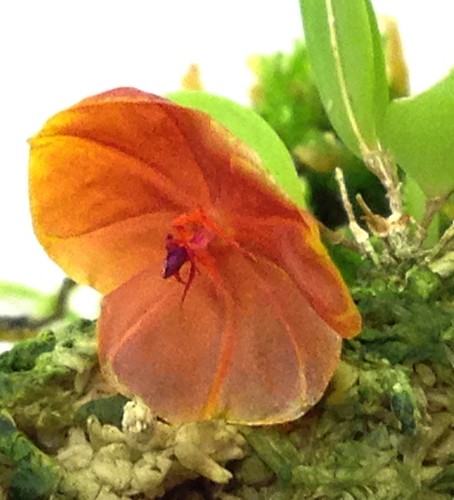 Here's a shot with the ubiquitous dime as a scale reference.  I'm completely enchanted with this tiny orchid. 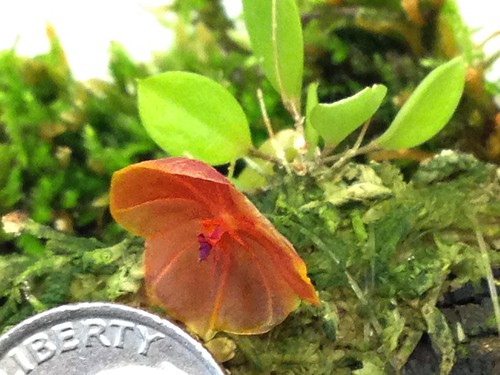 The tiny Lepanthes telipogoniflora I have in a glass globe in my office is so close to blooming! 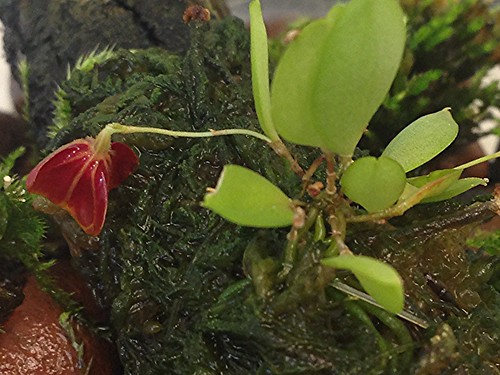 I can't wait to see this open, but even now, it's so cool.  I love the triangular folding of the bud, and of course the color.  I'm so excited! 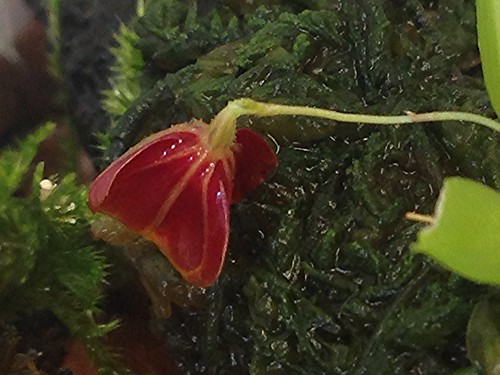 I finally, finally got around to making the background for my terrarium this weekend. I forgot to take progress pictures, though, sorry.

Once the foam was cured (24 hours), I smeared on a layer of silicone caulk and pressed a thick layer of loose coco fiber over everything.  The coco fiber embeds in the caulk and gives a nice natural-ish look.

I let the silicone dry for 24 hours, then brushed off the excess coco fiber.  Ta Da!!! 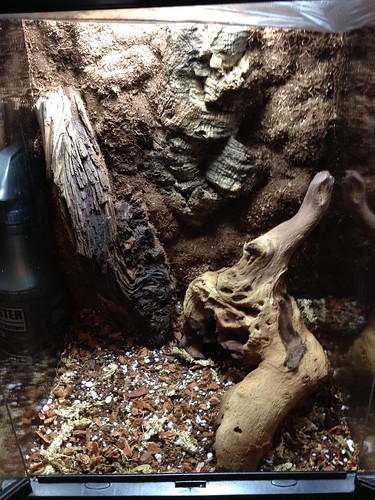 I added all the plants back in tonight.  I really like the way this came out. 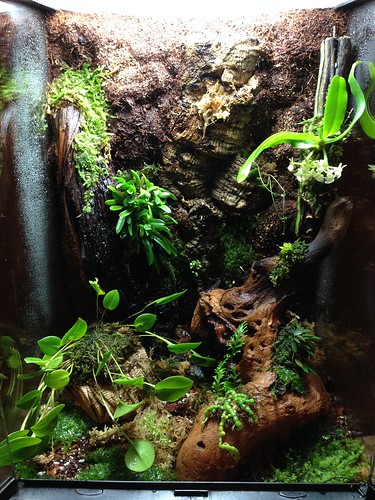 I've been eagerly watching the rest of my amaryllis ever since the Minerva finished blooming a couple weeks ago.  Minerva ended up with four flowers on one scape (stalk).  It doesn't look like there will be a second scape, and it's started growing leaves now.  Still, it was a nice show and has a healthy bulb.

On to the bulbs in bud! This is a Red Lion that I got last year when I tried to buy a Minerva .  This one has TWO scapes this year!  I put my amaryllis outside during the summer, and this one evidently was very happy.  Usually it takes a couple years before I get double scapes after I get a new bulb. 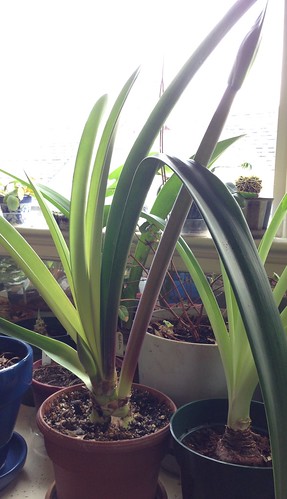 The next four are new bulbs to me this year.  This is Christmas Gift, which will have large single white flowers.  This was the biggest amaryllis bulb I've ever gotten- it's fully 6 inches in diameter.  I'm hopeful that this may produce three scapes, but only one is showing at the moment. 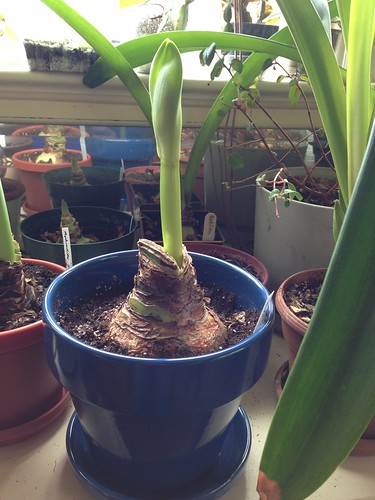 This is Aphrodite, which will have ruffly double flowers, white with a medium pink wash on the ends of the petals. 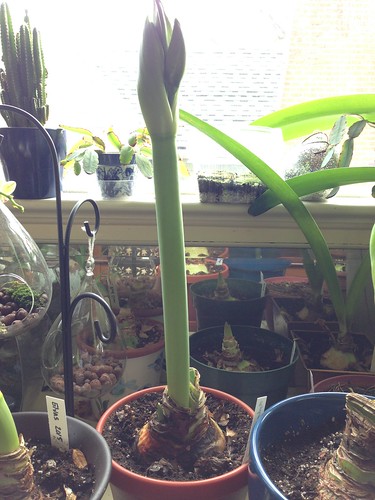 This is Elvas, which will have very ruffly double flowers, white with dark pink centers.  After I took this picture, I noticed something suspicious on the side of the bulb and unpotted it to have a look.  I found a largish spot of rot extending a couple layers into the side of the bulb.  I had to do surgery to cut out the rot so it's looking a bit ragged now, and we'll see how that affects the flowering.  But I'd rather have a live bulb and no flowers this year, than a dead bulb and no flowers ever. 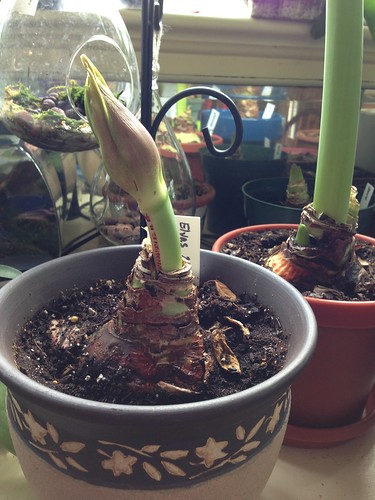 This is Apple Blossom, and though new this year, it sadly seems like it's not going to flower this time around.  It has six very healthy leaves, but no sign of a scape.  So I may be in suspense for another year as to whether this bulb-in-a-box is actually Apple Blossom, or something else (which is what happened last year). 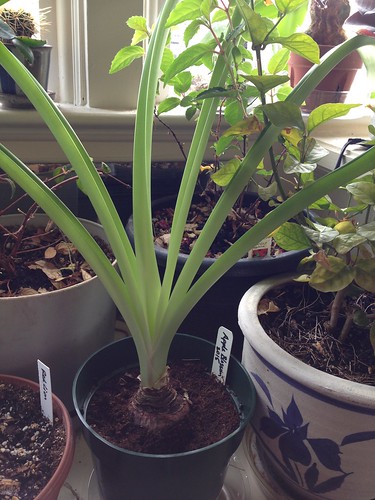 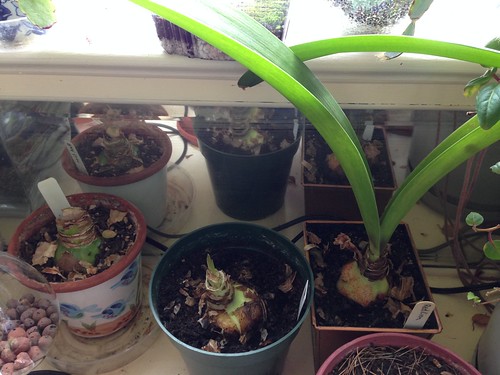 The 2008 bulb was a Christmas present from my dad, and has bloomed faithfully every year.  I'm not sure if it going to bloom this year, since there's no sign of a scape yet, but I haven't given up hope. It seems like it usually blooms around March.

I didn't repot 2008 into fresh soil last year or the year before, so it may be that it didn't store up enough energy last summer to produce blooms.  Ah well.  I repotted all three of these into fresh soil after I took this picture.

And here's an overview of my plant window.  It gets pretty crowded during the winter, and especially so this winter.  In addition to the orchids that are there year-round, there are all the plants that go outside during the summer: the amaryllis (amaryllises? amarylli?), a ponytail palm (the big spiky one on the far left, which I've had since 1998 when it fit in a 1.5" pot), two jasmines, two fuchsias, a kaffir lime, a turmeric, and Emma's front-porch begonia (which didn't fit on the plant counter, but is on the dining table to the right of the picture and getting very leggy).

I really need to keep winter space availability in mind when I go plant-crazy in the summer. 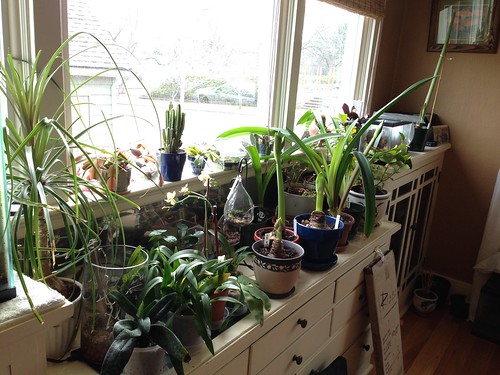 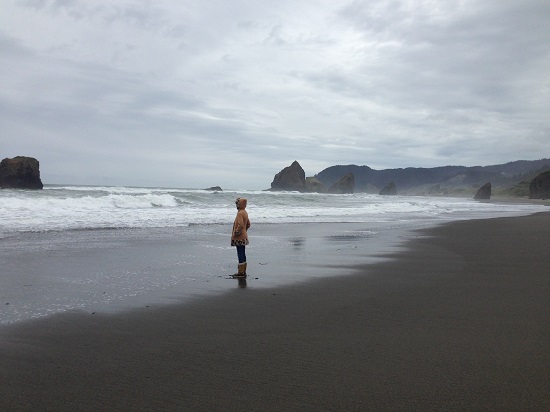 Where The Mind Is Without Fear
Rabindranath Tagore

Where the mind is without fear and the head is held high
Where knowledge is free
Where the world has not been broken up into fragments
By narrow domestic walls
Where words come out from the depth of truth
Where tireless striving stretches its arms towards perfection
Where the clear stream of reason has not lost its way
Into the dreary desert sand of dead habit
Where the mind is led forward by thee
Into ever-widening thought and action
Into that heaven of freedom, my Father, let my country awake.
By Sue at 10:32 PM No comments:
in: Blogger's (Silent) Poetry Reading
Newer Posts Older Posts Home
Subscribe to: Posts (Atom)