Emma and I have been somewhat tied to the car for our transportation around town. She's not terribly confident on her bike yet, and I'm not confident about her riding on main roads. Walking is fine when we're not on a deadline to get wherever we're going, but definitely takes a little more planning and time-awareness.

However, we're tied to the car no more! Lookie! 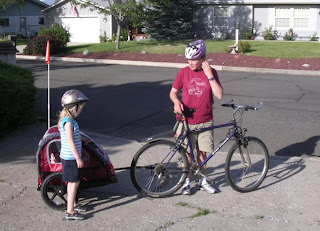 A new bike trailer, hitched to Shaun's old bike. So fun! We've already been to the grocery store and the post office. Hooray!

The trailer has a cargo compartment in the back, and two seats up front. With Emma in it, I did a small-to-medium grocery trip, and without her in it, I will be able to tote a lot of groceries. 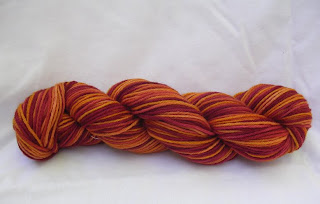 This is another failure-turned-success through the magic of overdyeing. This is the red and yellow skein from my dye day last October. While the original dye job was fine as it was, I couldn't look at it without seeing ketchup and mustard. The yellow was just too bright, and the contrast between the red and yellow was too pronounced.

So last night I dunked the skein in a weak red dyepot. The bright yellow turned orange, and the red deepened. Very nice.
By Sue at 10:25 AM 2 comments:
in: dyeing

I just tried to show Emma how to do a headstand.

Anyone who weighs more than a 12-year-old should not do headstands.

The somersaults and cartwheels were OK.
By Sue at 5:59 PM 2 comments:
in: Adventures in Toddlerland

I just got home from a overnight WORK TRIP out to John Day, Oregon, to delineate a wetland.

I am tired, thorn-scratched, bug-bitten, slightly sunburned despite the SPF 50 lotion, mud-splattered, and sweaty.

My in-laws have been visiting for the past week, and in between the cooking and keeping the house tidy and sightseeing trips, I've been spinning. It's a good activity for casual interaction while sitting around and chatting or they're reading or whatever. It makes me feel engaged and companionable, but not the center of attention, and it gives me something to do with my hands.

I decided to start spinning Herkel's wool, the Merino x Columbia fleece from last fall, even though I haven't finished combing it. I don't have a lot combed yet, but since I'm spinning this ridiculously fine, even the little bit of top I have will take a nice long time to turn into singles. 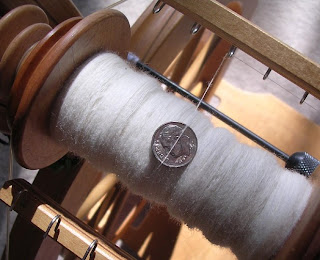 That's 36 grams spun up, and I have 63 grams of combed fiber left. I figure I'll spin everything I have combed so far onto one bobbin, then comb a second 100g batch, spin that separately, and ply them together. The singles are about 120-140 wpi, right on target, so this will be a LOT of yardage!

Guess who just got an offer to be re-hired at her job? 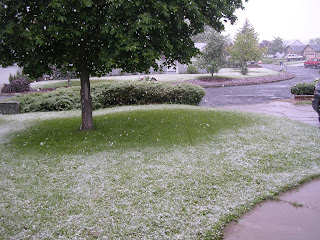 My goodness, two posts in two days. What is this world coming to? Not only that, I have another finished object to show off. 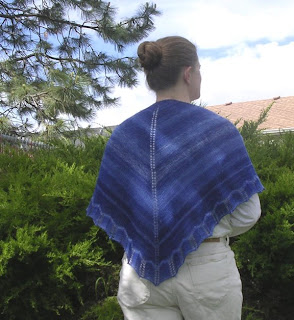 This is the Agate Shawl that I started last year in Friday Harbor. The yarn is handspun, from a bundle of merino top that I won from Panda Bonzai, and spun last May. I started knitting in July, did the bulk of it in Friday Harbor, then mostly ignored it all winter because I couldn't decide how to finish the edge. Knitting paralysis at its best. This is such delicious yarn, and I wanted to use as much of it as possible. I couldn't figure out what I wanted to do.

Last Friday, I just sat down and did it. I charted out a simple lace pattern that fit the stitch count and continued out from the body (rather than being a knit-on edging) and just started knitting. It was time to turn this UFO into a FO. 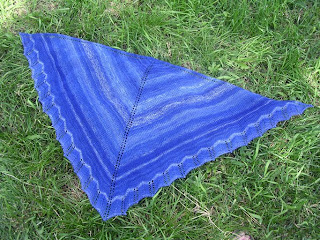 And you know? I love it. It's simple, doesn't detract from the handspun, and I think it actually complements it very well. 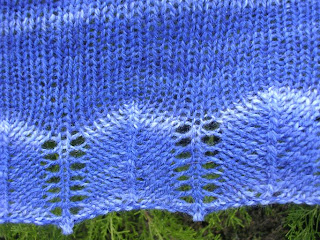 I particularly like the transition from the body to the edging. It was random chance that a lighter stripe came up in the yarn just where I started the edging, and it highlights the points of the lace beautifully.

The lace is a very basic 2-row repeat, just a centered double decrease and yarn-overs at the ends of the repeat unit, with a purl return row. I didn't know exactly how many rows of lace I was going to get out of the remains of the ball of yarn, but the simple pattern meant that I could knit until I nearly ran out of yarn. I wanted at least 5 lace repeats, and anything longer would be great. I ended up with 8 repeats, and after the bind-off I had two and a half yards of yarn left over. Perfect. 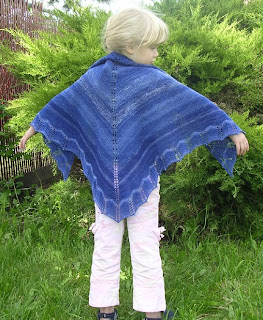 I'm not sure she's going to get it, though. This is some of my favorite handspun, yummy yummy handspun, and I don't think I can sacrifice it to the dress-up box. 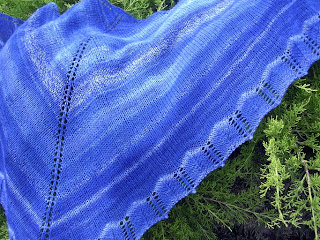 I have a couple more actual finished object to show! Wow! It's amazing how things get done when you...do things.

First up is a pair of owlets. How cute are these guys??!! I saw this pattern on Ravelry, and knew I would be making some sooner or later. It seems that last week was the time, as Emma and I were meeting my former co-worker for lunch in the park, and she had mentioned one time how much she likes owls. So I made three, and Emma picked out one to give to her. 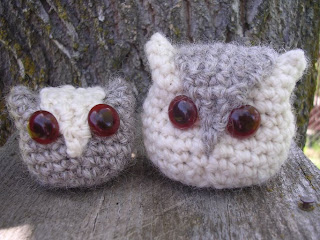 These are my own handspun; the gray is Romney/Border Leicester from Friday Harbor, and the cream is Finn from eBay, and is some of my first handspun. The owlet that has left the nest was the largest of the three, same color pattern as the smallest.

I'm not entirely happy with the eye placement on the smallest, and I think the middle sized one would be better with the large eyes I used on the largest owlet. But overall? Such a cute pattern! My mom would have loved these. 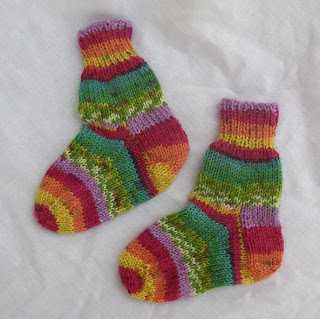 These were mostly knit while camping two weeks ago, the weekend of the triathlon and the giant waterfall. I stupidly started the toe of the second sock too soon, and didn't realize it until I had already cut the yarn and kitchenered the blasted thing together. So it went to time-out for a couple weeks. I took it up again Friday, un-kitchenered it, frogged the toe, and reknit it, this time to the proper length. All better. These will be in my shop, if anyone's interested.

I'll close for now with a picture that makes me smile. 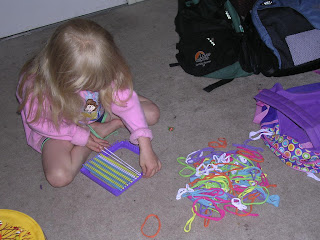 Emma's weaving! I bought her a looper loom a couple weeks ago, and she's been having fun with it. We did the first one together to teach her how it works, but now she's doing one all by herself. Not terribly fast, but all by herself.

I had one of these when I was little, and spent many fun hours making potholders. Unfortunately, Emma's loom came with polyester (or some synthetic) loops, so her potholders are useless as potholders. They do make nice doll rugs, though, and the other day she asked me if it's possible to "make a really lot and sew them together to make a dolly blanket."

Emma just came into to the living room, in tears. The following conversation took place:

Me, distracted, and browsing around Ravelry: "Why sweetie? What are you going to glue?"

Me, suddenly not distracted: "What?"

Emma, sobbing: "I have to glue me, Mommy. I broke myself."


She held out an eyelash, which evidently fell out when she rubbed her eye.

(Thank goodness she knows to ask before getting glue off the shelf.)
By Sue at 4:13 PM 6 comments:
in: Adventures in Toddlerland
Newer Posts Older Posts Home
Subscribe to: Posts (Atom)