Finally, here's the Crocus silk yarn, all plied up. It's only been plied for, oh, I don't know...two weeks? Very pretty, prettier than this picture would lead you to believe; nice and drapey and soft, and I think it's going to be weft in a shawl, with Zephyr as the warp.

Maybe not though. It would also look nice knitted. I can't decide, and my brain is too fuzzy to think about it. Does anyone remember what it's like to not have sinus pain and a sore throat? I thought I was better, but then it came back. Emma's sounding very snurgly again today, too, and put herself to bed for a nap this afternoon. Shaun's on mega antibiotics now, and perhaps it's time for Emma and me to make appointments as well. Sigh.

I haven't felt up to much of anything recently. I tried knitting on my Mystic Waters shawl today, but the graph made my head hurt, so I put it away. The only thing I've been doing is more dyeing, and I have some pretty laceweight yarn in my shop now. 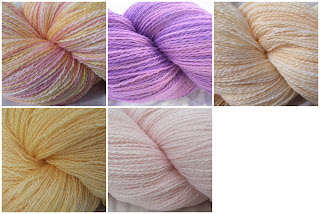 The one on the top left corner, Pink Grapefruit, is my current favorite. It looks so juicy. It was an experiment to see if I could make pink and orange look good together, inspired by the grapefruits that were on sale at the grocery store this week, and I think I succeeded.

One more thing I have to show off- my birthday present from Shaun: 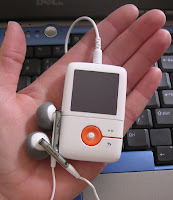 Isn't it cute? It's a little not-an-iPod, 1G. It's amazing how much it holds. I spent an evening ripping CDs (that sounds so violent), and was able to put almost my whole, albeit rather modest, collection on it. Fourteen CDs in the palm of my hand! Apparently I have tiny ears, though. The little ear plug thingies keep falling out.

The purported reason for this gift was so I could listen to my own music while working out on non-spin-class nights, and I will use it for that, but I also discovered that it makes yarn skeining go faster as well.
By Sue at 5:26 PM 4 comments:
in: dyeing, spinning

Last weekend, I gave a little spinning demonstration for a children's enrichment program here in town, called Think Link. They do weekly interactive programs on various topics for pre-K and grade-school age kids, and last week was spinning! There were 18 kids there, ranging in age from 3 to 10, both boys and girls.

I used some locally-donated wool for the demonstration. It's Jacob wool, from the hobby farm of one of Emma's classmates. I've never worked with Jacob before, and it's nice. Reminded me of Border Leicester or Romney. This was a lamb fleece, and fairly soft. I had to sort and wash it before the big day, and Cobalt was extremely interested in the process! 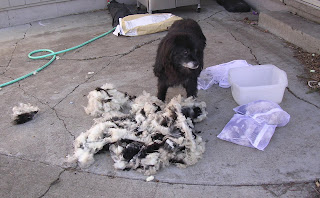 It washed up beautifully (in the washing machine, one soapy soak and two rinses), and the white parts were bright white, the black parts were inky black. Though the fiber was soft, and the colors beautiful, I was glad that I hadn't paid for this wool. It was FULL of second cuts. I shook out and picked out as many as I could, but still there were more...

I borrowed a carder and some handcards, and brought my own combs, to demonstrate fiber prep, and showed them how my wheel works. I also made "twisty sticks" for the kids: a 7" piece of dowel with a cup hook on the end. These work sort of like drop spindles, without the whorl. You just roll them along your leg. It was really fun to see the kids figuring out how to make them work and see how thrilled they were that they could make "real yarn" with just a stick. I also let them try out the hand cards and treadling my wheel.

The drum carder I borrowed was in pretty poor condition, so all the fiber I prepared was done on the hand cards. This was the first time I used hand cards for more than just a couple rolags, and I was surprised that it was so enjoyable. Slower than a drum carder, for sure, but relaxing, and I was able to spin a bunch of my own rolags! They really do work magnificently for long draw. I blended the white and black portions of the fleece, and it made a nice heathery gray yarn. I carded probably half a pound of wool in 45 minutes, and spun about half of that the night before the demonstration, to make a sample skein. The remainder of the pre-carded rolags were for the kids to experiment with.

So it was a fun morning, even though I had the beginnings of a scratchy throat, and that was the day I took to my bed with a fever of 103˚F. I had a good time, I think the kids had a good time, and I know of at least one boy (9 years old) who has been bugging his parents for a spinning wheel.

Plus, there was a photographer there from the local paper, and last Wednesday, I made the front page! 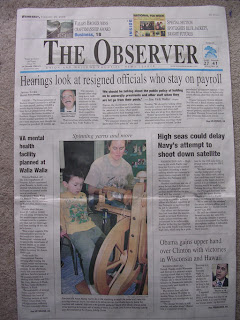 Part of the enjoyment of spinning is that you get to look at a piece of Beautiful Fiber Equipment. Furniture. Art. Whatever. The Danish Oil treatment (Watco "Natural" color Danish Oil, two coats) went very well, and my wheel is drool-worthy again.

This is the before shot. Not too bad; a little dull, but not horribly so. It certainly gets the job done. 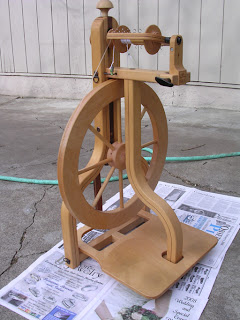 The most noticeable improvement was on the drive wheel hub. It went from looking very very dried out and dull: 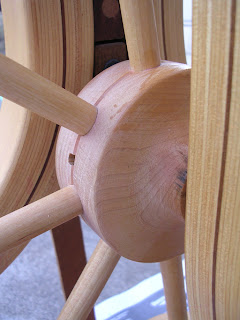 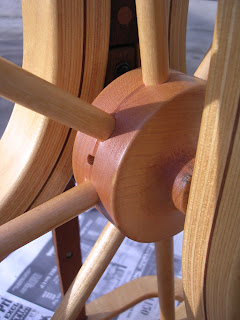 The whole wheel was like this. I didn't even realize how dull it looked until I saw the improvement. The walnut areas really pop now, 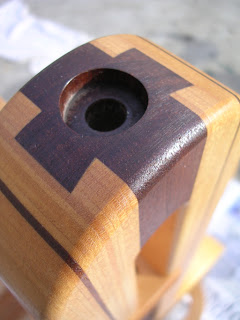 the maple and walnut colors became richer and the contrast increased, 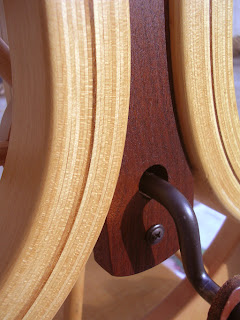 and the whole wheel has a beautiful luster now. 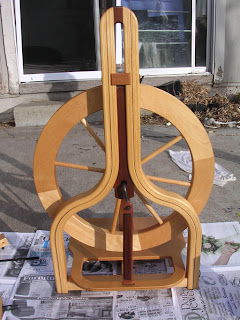 I mentioned in my last post that I did some tweaking and repair on the wheel to improve its performance. This involved taking out the three large bolts in the back upright, so that I could move around the walnut insert that's between the back legs. I was able to align this walnut piece and the smaller swinging piece on the inside that carries the crank in a brass bearing, so that the drive wheel now sits level and square to the frame, and the crank doesn't rub on the wood of the back walnut piece. I tightened the screws on that swinging piece so the drive wheel doesn't wobble anymore, either. It was fiddly, but it now spins almost perfectly silently, and very smoothly. 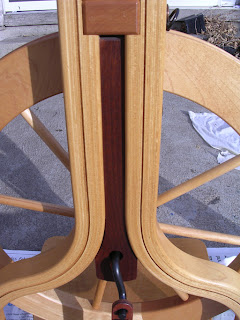 The second improvement was to replace the tension screw on the top of the wheel. 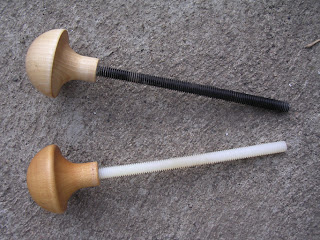 Somewhere along the line, Schacht switched from using a white plastic screw to the black metal one. It is a vast, vast improvement. The plastic one flexed as I spun, just from the motion of the flyer, and made the metal flyer support rattle annoyingly against the wood. I jimmied it with paper shims, which stopped the noise somewhat, but that made it hard to adjust the tension, as the paper would slip. I wish I could take the wooden knob from the old one and put it on the new one, but it's not that big of a deal. You can really see how much the maple has darkened as it aged!

This is the serial number plate that every Schacht Matchless wheel has: 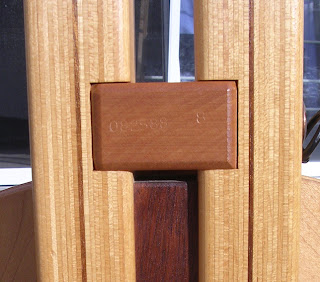 If you look closely, you can see that the numbers read 082588 8. This means that my wheel was made on August 25, 1988, and it was the eighth one made that day. Twenty years old, this year. It was coming off the production line as I was preparing for my senior year of high school. 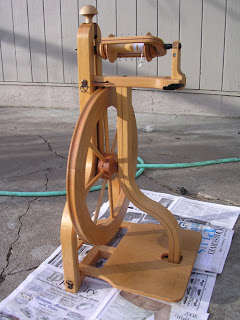 Ready to spin, once the oil finishes drying overnight and I put the drive band back on. My wheel and I are very happy today.
By Sue at 4:21 PM 7 comments:
in: spinning

Once again, I have been a blog-slacker. Emma and I have both been sick (AGAIN) (ARGGGH), and I just haven't felt like writing or taking pictures. Gotta love the seething cauldron of germs that is a preschool. We/I used to get sick maybe once a year, but this winter, the first winter of preschool, we've been sick three (four?) times already. I spent most of the weekend in bed, with a lovely 103˚ fever, sore throat, and cough on Saturday afternoon, and residual chest congestion and lethargy on Sunday. At least I didn't get the hacking cough Emma has had for the past week. It seems like everybody we know has been sick in the past couple weeks. So, anyone want to come visit us in the Valley of Pestilence?

I have been doing some fibery things in the couple weeks since I last posted. The biggest project, and one that will be ongoing, is to sort of start a new part time job. I answered a help-wanted ad on Ravelry, and am now a production spinner for Tanglewood Fiber Creations, an Oregon company that sells hand dyed, hand spun luxury yarns. I spent three very lovely days last week spinning up 24 ounces of natural cream color 50% cashmere/50% silk. Lovely! But did I take pictures? Of course not.

In addition, I have:
Other than that, not much going on. Shaun and Emma took me out to lunch for my birthday today, and since Shaun had to teach tonight we're doing a birthday dinner tomorrow. A low-key birthday (and I had to work today, on my birthday and a Federal holiday), but nice.

I did get a nice surprise a week or so ago, when I saw myself displayed as a Designer on Ravelry's main "Patterns" page. I even had the energy to grab a screenshot. See my little snail-y avatar?! 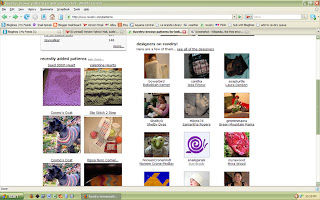 The first bobbin of silk singles is done and rewound, ready for plying. 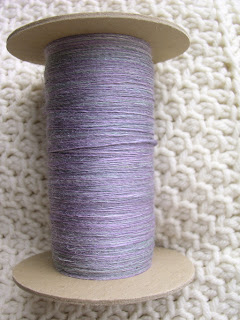 The singles are ~65 wpi. I love the way the colors shift randomly through various shades of lavender and green, though you can't really see much of the green here on the rewound bobbin. 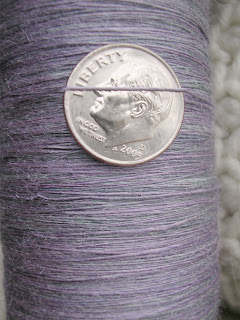 I dyed the second 2-oz portion yesterday, and started spinning it this afternoon. It's so startling to see silk roving after it's been dyed and rinsed. Even after it's dry, it looks like something the cat horked up and left on the carpet. Compacted, lumpy, and unlovely. Well, as unlovely as pure silk roving can ever be. ;-) 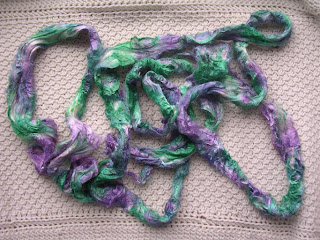 Here's a little before and after comparison for you. Before: 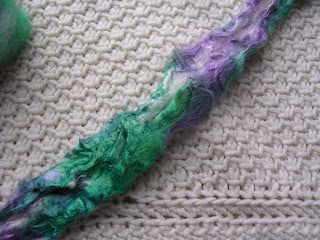 And after pulling ever so slightly, that very same spot in the roving puffs up, the fibers align, and it's ready to spin: 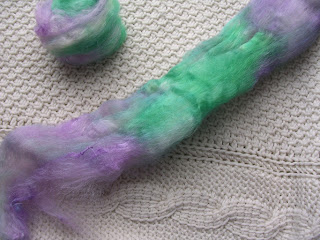 A wheel view of the whole two ounces, ready to spin: 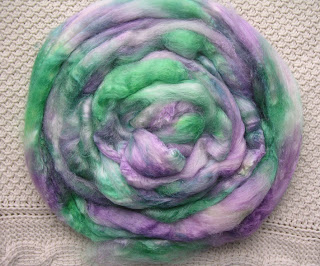 Oh yes, there is much silken, sheeny gorgeousness in my house today..... 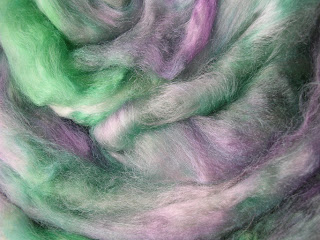 By Sue at 3:42 PM 7 comments:
in: dyeing, spinning
My contribution to The Third Annual Bloggers (Silent) Poetry Reading: 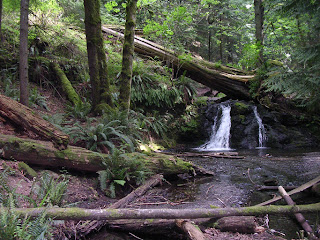 Stand still. The trees ahead of you and bushes beside you
Are not lost. Wherever you are is called Here,
And you must treat it as a powerful stranger,
Must ask permission to know it and be known.
The forest breathes. Listen. It answers,
I have made this place around you,
If you leave it you may come back again, saying
Here.
No two trees are the same to Raven.
No two branches are the same to Wren.
If what a tree or a bush does is lost on you,
You are surely lost. Stand still. The forest knows
Where you are. You must let it find you.

Remember the doll quilt I made for Emma, the day after Christmas? Well, today Emma found a new use for it. It is now also a saddle, suitable for transporting Snow White and Sleeping Beauty to the ball at the palace. 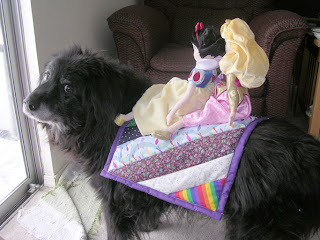 Cobalt, the noble steed, was not amused.
By Sue at 9:14 AM 4 comments:
Newer Posts Older Posts Home
Subscribe to: Posts (Atom)