I started a new project, of a type I haven't done in a while. I'm once again crocheting with sewing thread. This is the Sunburst Pineapple doily, originally published in 1951.

That picture shows the results of an hour and a half of work: 10 rounds.
By Sue at 12:11 PM No comments:
in: crochet, micro crochet

My dad gave Emma a whole pile of assorted story CDs for Christmas a couple years ago, which he recorded off the 30+ year old records that my sister and I listened to when we were children.

Emma was listening to the "Lady and the Tramp" CD earlier today, and I told her that I listened to those same stories when I was her age, which she thought was very cool.

Then she asked if I still have my CD player from when I was little. I had to explain that we didn't have CDs then, and that I listened to the stories on records.

She did finally know what they were when I described them, and said that she saw some in the library at school. Then she looked up at me quizzically.

"Are you from the olden days, Mommy?"

Gah. This was so not what I needed to hear two days after my 39th birthday.
By Sue at 9:09 PM 2 comments:
in: Adventures in Toddlerland

I wove off another set of bookmarks last week. This was the purple silk warp I dyed in January, along with some lighter purple silk to use as weft. 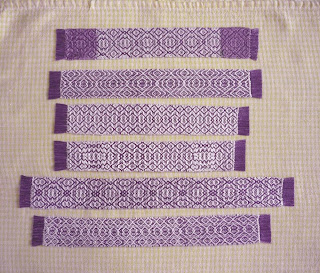 The one on top shows the lavender weft, in the sections on the ends. The rest of these have all white weft. There were two other bookmarks from this warp, which used the lavender weft, but I don't have pictures of them since they have already left my house...because...

I recently put some of my work in a gallery of local artists here in La Grande, the Blue Turtle Gallery. In a gallery! Me! In a completely uncharacteristic display of bravery, I walked into the gallery and asked the owner if she would be interested in displaying my textile creations. She was quite enthusiastic, and we set up an appointment for me to show her my work the next day. She said she's been looking for a textile artist to add to the gallery for a while, and was very impressed with what I brought to show her. So now I have woven, knit, and crochet items for sale in a gallery. Eep!

One last thing to report: 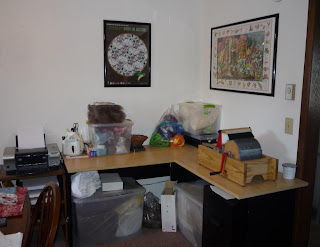 I am slowly succeeding in my plan to take over the entire house with fiber fun. This is what used to be the computer desk/bookcase in the dining room, formerly occupied by old textbooks and all our assorted clutter, and sometimes used by Shaun to work on his computer.

Plus, the dining table is now available for actual dining, since the carder no longer resides on it.

I love having a dedicated spot for the carder, and it feels very productive to have everything set up and ready to go. Feel like carding a batt or two? Go for it! Right now I have two large bins of alpaca fleeces under the desk, which I plan to work through this spring and summer. The small box in the middle is for carding waste. On top of the counter, right to left: the carder; carding tools (flicker, batt picker, etc); a bin of "add-ins" like silk, bamboo, mohair, sparklies, etc.; bundles of hand dyed bluefaced leicester top ready for blending; a scale; a bin of finished batts; and my "office", with a desk organizer (pens, tape, stapler, etc) and the printer (with trays in the stand for paper storage).

There's plenty of space to work with the batts, pulling them apart for additional blending passes, and there's space to plug in my computer when I need to print labels or receipts. The dining table is close by if I need additional space for photographing and packaging batts.

I've enjoyed growing orchids for more than a decade. They're just such beautiful plants, with the added bonus of gorgeous flowers. I wanted to share the exciting botanical happenings that are going on at my house right now, with a couple plants in bud. 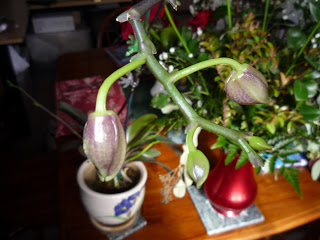 This is Phalaenopsis Golden Light, which (strangely enough) does not have a yellow or gold flower. It is a multi-species hybrid cross with deep, clear, wine red flowers; about 2 inches across and very substantial and waxy-looking. I bought this plant from a local grocery store in November 2008, in bloom, with two basal keikeis. A keiki is a vegetative offshoot from the mother plant. They are more commonly seen on the node of a flower spike, but can also form out of the main "trunk" of monopodial orchids (orchids that grow only up from one point, not branching).

When I bought this orchid, it had two spikes and was on sale because the blooms were fading. The shorter spike had one flower remaining and no buds. That flower faded in about a week. The other (longer) spike had five flowers open and a bunch of buds. That spike bloomed continuously for the next 8 months. After the original five flowers faded, which took a month (they were still there at Christmas), it would open one to three flowers at a time, each of which would last a month. It was a nice constant display. After the last flower finished, it took a rest. This is typically when the flower spikes are cut off to let the plant recuperate and put its energy into growing more leaves and getting strong.

However, both flower spikes were still green and alive, and I knew that often they will continue to develop. Sometimes the nodes along the spike will even develop into flowering side branches. Anyway, since the plant still looked vigorous and the spikes were still green, I left both spikes on the plant. I couldn't bear to cut them. It grew a nice new leaf over the summer.

A couple months ago, I noticed that the tip of the longer spike was growing again, showing four new buds. AND, three of the nodes on the larger spike are developing into side spikes, one of which has a well-developed bud. AND, the shorter spike also has a node developing into a side spike. AND, there is a completely new spike coming out of the mother plant! AND, there is a completely new flower spike coming out of one of the basal keikis! I've never had a Phalaenopsis bloom this well for me before. It's so exciting! Go, orchid, go!

Also exciting at the moment is my Aerangis citrata. I bought this through the mail from a nursery in Montana in January 2009. It was in spike when I bought it, and bloomed with a spike about 8 inches long and 12 flowers. When those flowers were done, the spike dried up and I cut it off. Cool to see the flowers, but not as exciting as blooming it myself.

About two months ago, I noticed a new spike! It's been slow going, because I'm sure my house isn't as warm as the orchids would like, but it is developing. 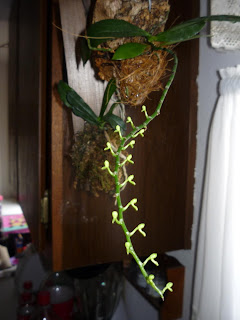 This spike developed to about 12 inches long with 18 buds, an improvement over last year. Ha! It also grew a nice big leaf this year, which I'm sure helped. I lost two of the buds, though. One got too dry and/or cold while we were gone over Christmas, and shriveled up (blasted, in plant-speak). The other I accidentally knocked off when I was watering (sob!). The remaining 16 seem to be doing OK, though. You can see the long spur starting to develop on the underside of the flowers. The flowers will be white, about an inch in diameter with the spur also about an inch long.

You can also see another orchid in the background of that last picture, below the one that's in spike. That's Aerangis mystacidii, bought in December 2008. That one came to me pretty young, and I haven't seen it bloom yet. It did put on two leaves this year. I also have Aerangis punctata and Aerangis fastuosa, bought at the same time as the A. citrata. The A. punctata budded once, but it blasted before it could open. Both these plants put on two leaves this year as well. I love my little orchid collection.

Last but not least, my amaryllis is well on its way to blooming. 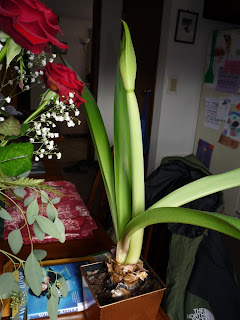 This is a Red Lion variety, with large all-red flowers. Dad gave this to me for Christmas in 2008, and this is its third blooming for me. Only one flower stalk this time around, but it got a little dry and forgotten last summer (oops) when I was stressed about being laid off again.

Yay for greenery in the house!
By Sue at 10:57 PM 2 comments:
in: amaryllis, orchids

My contribution to the Fifth Annual Blogger's (Silent) Poetry Reading: I loved you before I met you.
That spark
Brought to startling clarity,
Boundless and immediate,
With your first breath.

Realizing this was true and forever,
I still could not fathom its depth.
Resonating between us,
Amplified,
Love building on itself.