Not a bad start

I've still been spinning since Spinzilla ended two weeks ago.  I've done a load of yarn on my Hansen miniSpinner, which is still SO FABULOUS, but I also did another tiny skein on my new Jenkins Bee Hummingbird spindle.

I bought a couple bundles of very nice raw Australian merino from a farm in eastern Australia (RaniSmithDesigns on Etsy.  Highly recommended.).  For this first little trial skein I used two 1 gram bunches from Ewe #71.  The fiber thickness on this fleece was measured at 17.4 microns.  This is beautiful wool, with gorgeous luster, crimp, and softness, and hardly any vegetable matter.

I washed the 1 gram bundles individually, in boiling water and dish soap.  Each lock lost about 0.17 gram during washing- mostly lanolin, because there was hardly any dirt.  Here's what they looked like before and after. 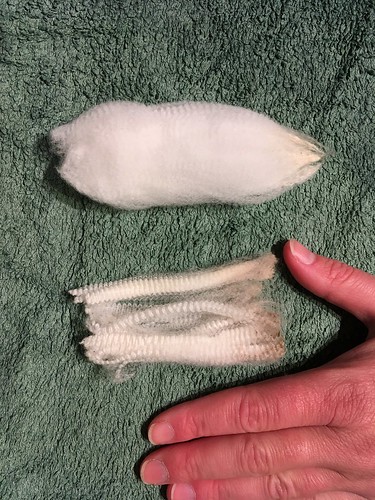 I flicked them with a dog slicker to get the tips open and the shorter fibers out.  Then I spun and spun and spun, about four hours for each bundle. 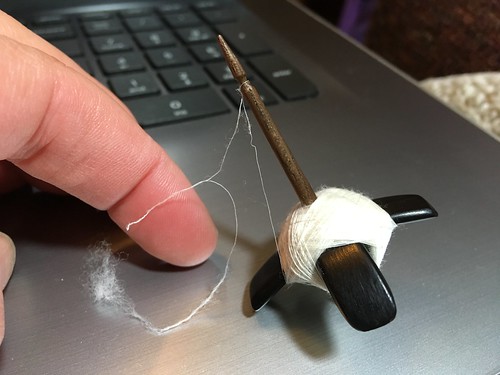 This is the first spindleful done. The wool spun like a dream, it just flowed and drafted out thinner and thinner.  It was delightful.

I spun each bundle as a separate spindleful, then wound them onto storage bobbins. 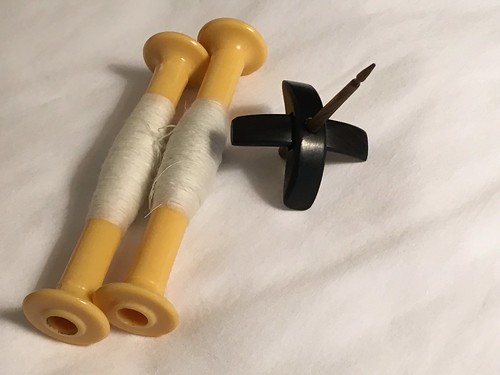 I didn't make a plying ball, but just plied from the bobbins.  In retrospect I'm not sure why I thought that would be a good idea, because it never has been in the past, but I guess I thought minimal handling of the singles would be better since they were so very very fine.

It was not a good idea, and made plying much more frustrating than it should have been.  The singles were fairly strong, considering, and a plying ball would have been fine. As it was, I lost 0.38 gram of singles (which equates to a fair amount of yardage!) to a massive tangle that I couldn't get undone.  Ah well, lesson learned.

Anyway, I got the rest of it safely plied. 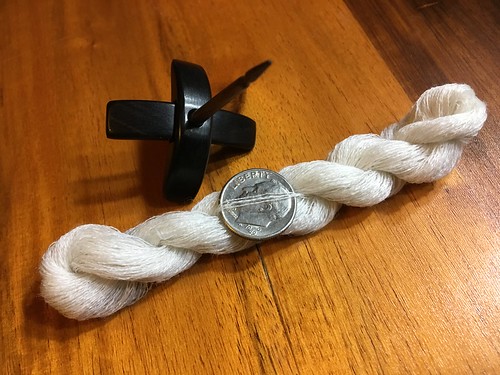 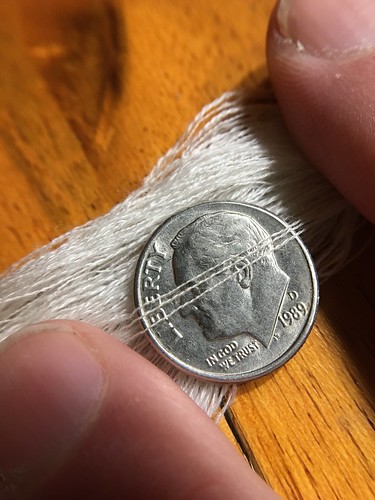 So do you want to know a secret?  One reason that I'm excited about this tiny spindle and this little test skein of ultra-cobweb weight yarn is that there's a spinning contest in New Zealand (OOPS! Sorry!) Tasmania, Australia that runs every two years.  It's called the International Longest Thread Competition and is part of the Bothwell Spin In and Fibre Festival.  The goal is to spin the longest 2-ply thread you can from 10 grams of fiber.  Entries for the 2019 competition are due in October 2018, and with the postal system being what it is, I would want to mail my entry by September 2018.

This skein is a good first attempt.  My goal is to get the yarn to half this thickness and I need to work on my plying joins.  With yarn this thin there is no margin for error.
By Sue at 7:06 AM 2 comments:
in: Bee Hummingbird, Longest Thread, spindling, spinning

Well, it's been a couple weeks since the spinning finished but the results are finally (finally, finally) in.  Here's a shot of the pile of yarn that I spun during that single week. 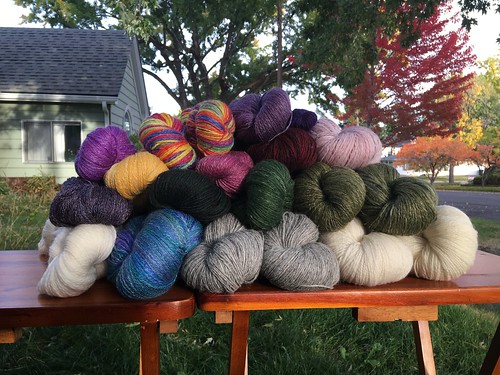 And not only that, my team won first place overall, with a total yardage of 255,718 Spinzilla yards!  Way to go Team Knot Another Hat!

And not only that, I got fourth place overall for individual spinner's yardage!  WooHoo!

I enjoyed this year's Spinzilla.  There were some serious top-level organizational issues, but my team is great and the spinning was fun.
By Sue at 8:01 PM 1 comment:
in: spinning, Spinzilla 2017

Well, here we are on the last day.  I went a little overboard. 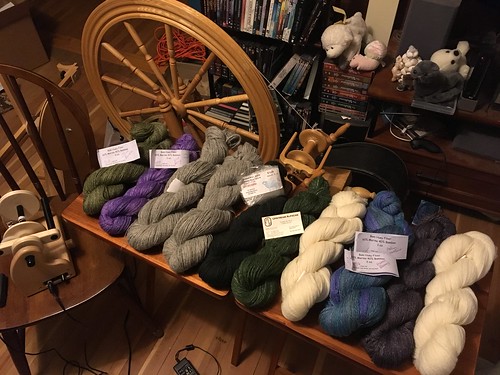 Here's what I did today. 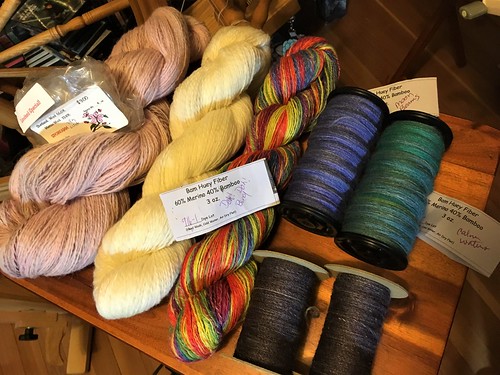 Day 5 was all about plying: 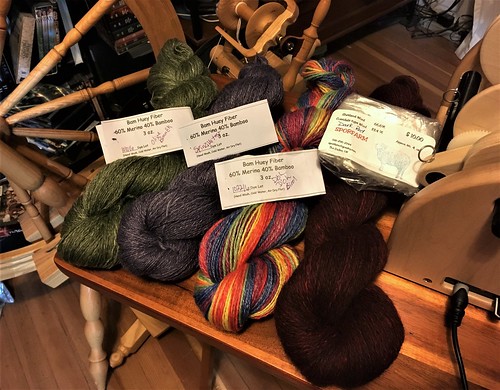 I took the miniSpinner out on the front porch for a while this afternoon, and it was so lovely to sit and spin and watch the sun through the leaves, the squirrels in the big silver maple in the front yard, and the kids playing across the street.  This little spinner is much more portable than my big wheel. 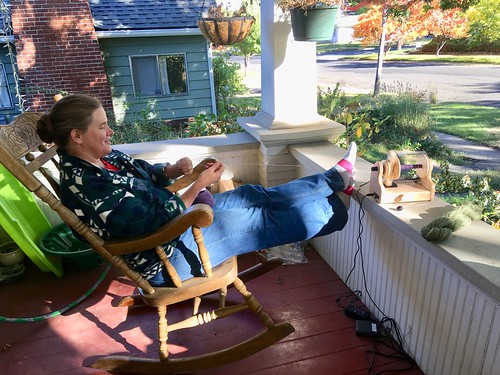 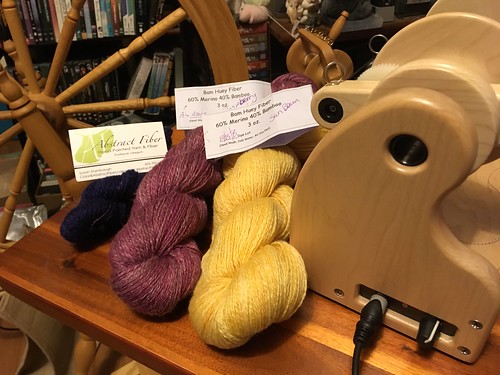 You may also notice that my miniSpinner is here!!!!!  I made it back in time to get it from the post office and I've been using it, and it's awesome and I love it. 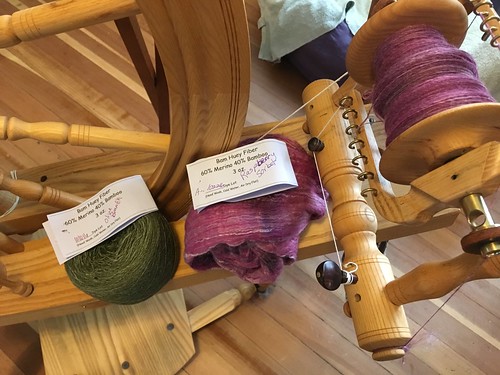 That's 3 oz Bam Huey “Olive Branch” and 1.5 oz Bam Huey Raspberry Sorbet” (half a wheel).  Not as much as I would have liked but I had to travel for work, from one side of the state to the other. I was in the office this morning, then a long lunch at home to spin this, then five hours of driving. Tomorrow is most of the day at the job site and five hours driving back home. I may not get anything spun at all tomorrow. Ugh.

On the other hand, I’ll try and make up for it this weekend, because... I did a thing, and my brand new Hansen Pro miniSpinner is arriving TOMORROW!!!  I probably won't get back home before the post office closes, though, and won't actually have it in my hands until Friday.  I've never owned an electric spinner, and while not having to treadle does feel somewhat like cheating, I couldn't get the thought of all that speeeeeeeeed out of my head.
By Sue at 9:30 PM No comments:
in: spinning, Spinzilla 2017

Here's my work for today: 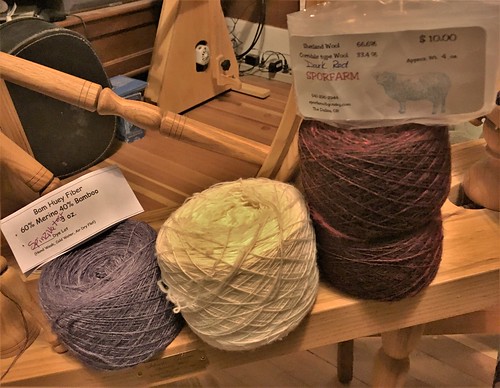 Please excuse the messy yarn cake on the merino, we got a new kitten three weeks ago, and she is a fiber thief.  I caught her triumphantly trotting across the living room with the cake in her mouth.  Evidently she hunted it down and killed it.

Here's what I did today: 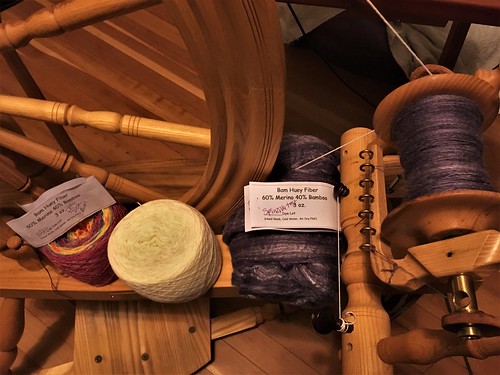 It's that time of year again!  Spinzilla! 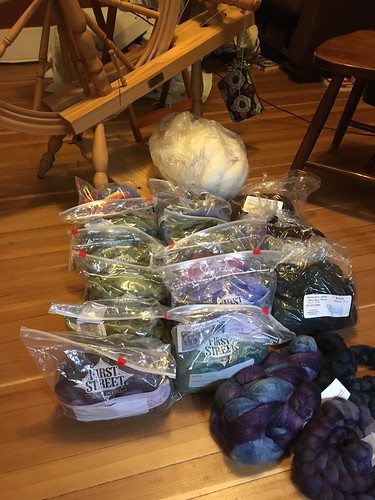 Spinning kicks off at 12:01 am tomorrow.  This is what I have lined up to spin, plus there's plenty more upstairs if none of this appeals when I'm ready to start a new bobbin.