Since I seem to be on a crocheting jag right now, I started this on Tuesday night. It's going pretty fast- two nights so far and tonight I should finish it up. I'm using #30 crochet cotton, and according to the pattern, it will be about 14" in diameter. No progress picture, but maybe a finished picture tomorrow!

Emma and I spent a couple hours yesterday in the garden, cleaning up a little. There are two HUGE lavender plants in the backyard, and one of them was in danger of taking over the world. The previous homeowners obviously hadn't trimmed it since it was planted three years ago (when the house was built), and the main stems were woody and floppy. I whacked it back severely, and along the way was able to harvest this: 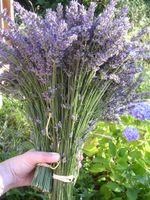 Three big bunches! I'm drying them for use in sachets and other assorted frou-frou.

It was a little hard for me to prune the plant that severely, because it was so pretty with all those flowers on it, but I learned at the Pelindaba Lavender Farm this past weekend that lavender likes to be really aggressively trimmed to keep it in shape, to keep the "trunks" from breaking, and to ensure bountiful flowers. And I actually only took the flowers off about half the plant, trimming the main stems that had fallen over and were trailing on the ground. There are still plenty of flowers to keep the yard pretty. I'll cut it back even more this fall after the flowers are done. Or maybe before if I decide I want to dry more flowers. Though there is still another whole giant lavender bush that needs pruning too!
By Sue at 12:59 PM
in: crochet

by the way a whole batch of pirate niece pictures arrived in the mail today...what a nice surprise to find waiting for me after work...

i have the most adorable niece ever niece.

Oh-- just looking at your lavender makes me feel blissful.