Sock Summit was so much fun. I don't yet know how much of my yarn sold, but even aside from that, it was great. This is the first fiber festival type thing I've ever been to, and I'm so glad I went. The energy, the enthusiasm, in the convention center was unbelievable. Everyone was friendly and excited to be there. The air fairly hummed. 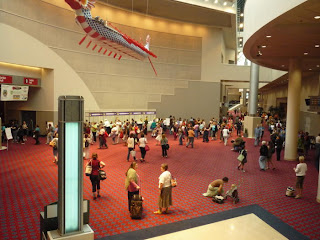 Thursday was the set up day, and I spent the day at the Yarny Goodness booth unpacking yarn (my own and others). The market opened for the students and teachers at 4:30, and it was crazy. The horde that descended on us when the doors opened was overwhelming - the roar as they opened the door was our first clue. Yikes! I did take a tour around the marketplace before it closed, mainly because the Yarny Goodness booth was too crowded for me to be any help. So. Much. Pretty. Yarn.

Friday I hung out at the YG booth some, and did a bit of shopping. I also participated in the gathering to set the new Guinness world record for the most people knitting at once. The previous record was shattered. 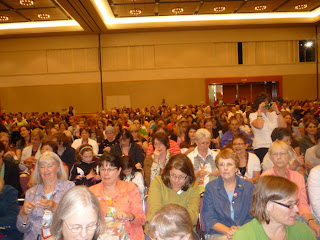 I don't know the final official count on how many were there, but the previous record was only 256 people, set in Australia only two months ago (sorry, Australia). The room had a maximum capacity of 1600, and it was pretty close to full, from what I could see.

On to Show-and-Tell. I finished up the pair of socks I was working on last week. I actually finished these last Wednesday. Emma and I had a fun time on the bus, by the way, and it's something I'll keep in mind for the future. In the six hours it took to get to Portland (an hour and a half longer than driving, but so nice not to have to do the driving!) I knit the entire sock except for the turned hem/top ribbing (which I did before we left) and kitchenering the toe (which I did at the hotel). Just plain stockinette, but it shows off the striping nicely. 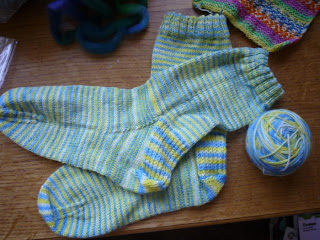 They fit great, and only used 2/3 of the skein of yarn. Each sock is 35 grams, and the leftover ball is 32 grams. So now I am confident that my skeins are the right size, even if someone makes taller or bigger socks, which was one of the purposes of knitting these. The finished fabric is nice and soft and smooth, and the yarn was great to knit with - not splitty at all. I'll enjoy wearing these.

My time at the Sock Summit Market was also productive, though I'm happy to report that I stayed within my budget. And what I did get will keep me happily occupied for a long time. 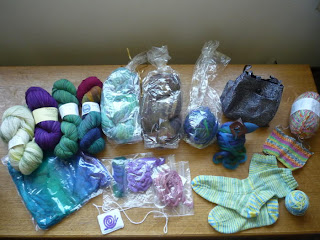 The four skeins of yarn on the left were unexpected "payment" for helping out at the Yarny Goodness/ Spindle Cat Studio booth, and did not count against my budget. They are:
The rest of that pile was what I bought: 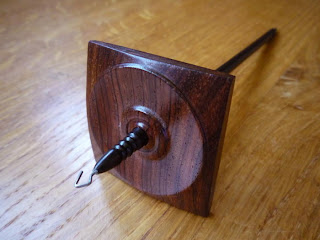 The whorl is cocobolo and the shaft is ebony, and it is beautifully crafted. The attention to detail on this is amazing. The shaft has decorative turnings, and the wood is silky smooth. Not only that, it spins like a dream. I bought this on Thursday afternoon, during the student/teacher preview. I knew that if I waited until Friday so I could think it over, it would be gone, gone, gone.

So Friday I was on a quest to find something to spin on it. That's when I kind of fell down at the Fiber Optic display. I didn't mean to get three bags of fiber, but I couldn't decide which one to get. So I got two, and they were such a joy to spin that I went back for a third. Ah, well. It's still cheap entertainment, when you consider the price for that many hours of happiness spent spinning.

And spin I did. 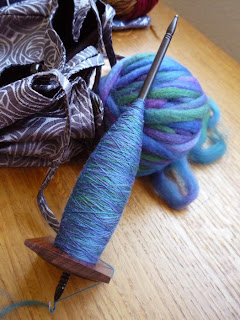 Over the course of the weekend, I spun the first quarter of the Superstition pencil roving. I'm going to chain-ply this for a 3-ply yarn, and knit myself pretty socks.

I spun most of the rest of the day Friday while I walked around the market and enjoyed the displays, while I talked to people at the Yarny Goodness booth, and even later that evening on the TriMet train (I was apparently quite the spectacle, and got my picture taken by two different people.)

While I was walking around, I also found this little Lantern Moon bag that is perfect for a spindling bag. 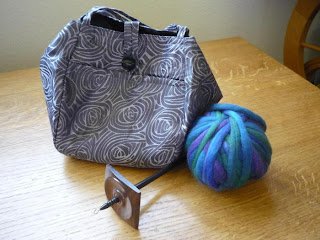 It's just the right size to hold some fiber, and loops right over my arm and snuggles into the crook of my elbow. It keeps the fiber out of the way of the spindle so it won't get wrapped into the yarn by accident, which was a problem as I was walking around and spinning out of my tote bag. Plus, the lining is a silky fabric, and lets the fiber slide out without sticking or fuzzing. It's just right.

More spindle pictures? Sure. Twist my arm! My new Spindlewood square mini is quite happy to join my Cascade Tiger. Aren't they pretty? 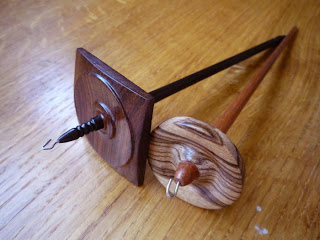 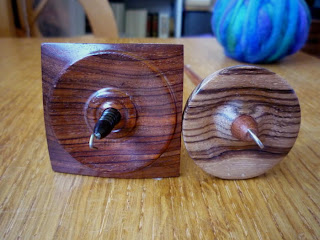 I decided a couple months ago, when my finger was poised over my mouse button to buy a Golding spindle online, that I am not going to buy spindles online. Instead, I am going to buy each in person. I don't need or want lots of spindles, and that way I can pick out a special one, try it out, and every time I use it I will remember the fun time I had at the event or place where I bought it.

So the Spindlewood will remind me of Sock Summit 2009, and the Cascade will remind me of weaving the practice shawl for Sheep-to-Shawl last year and teaching Emma to spin.
By Sue at 2:50 PM
in: knitting, spindling, spinning

Gorgeous spindle! Cocobolo is one of my favorites ;-)

Sorry I missed you! I'm sure we were in many of the same rooms together! Hope to see you in Cove on Saturday. ** aknitter52
http://blog.oregonlive.com/knitting/2009/08/video_at_sock_summit_knitters.html

I think there are two people between us at the world record event. My sister is on my right, and someone else is on her right, then you. That's hysterical! ** Anne