Fact: Only one grocery store in my town (sometimes) carries them, and they are $8.95 for a 10 ounce jar.

I mean, really. Cucumber pickles don't cost that much. Why do they charge so much for mushroom pickles?

Anyway, yesterday I took matters into my own hands. 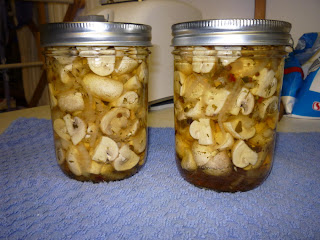 Button mushrooms were on sale at the grocery store, so I bought two pounds. Emma, who does not like mushrooms in any form, kept saying "Mama, are you sure you need that many mushrooms? That's really a lot." I think she was afraid that's all we were going to eat for the week!

At home, I washed them, cut them in quarters because they were large (though in future I would just do halves because they shrink when cooked), thinly sliced an onion, and simmered the mushrooms and onion in the pickling liquid:

After the mushrooms and onions were cooked but still firm, I took them out and packed them into hot clean pint jars. I turned up the heat on the liquid and boiled it, then ladled it into the jars, put the lids on, and processed in a boiling water bath for 25 minutes.

The result is delicious; better than the store-bought ones and much, much cheaper. Yay me!

I was on a roll yesterday, and after the pickles were done, I had to make some cookies. I read Renee's blog post on Friday, and the recipe was immediately bookmarked. 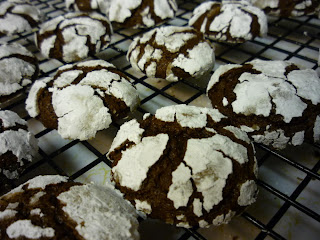 They are every bit as good as Renee said they are, even if they are from Martha Stewart's website. You really can't go wrong with a recipe that has 8 ounces of melted chocolate and half a cup of cocoa powder in the cookie dough. They're intensely chocolatey.

And actually, they're not as fiddly as a drop cookie to make, despite the chilling and rolling and coating in sugar. I skipped the second dough-chilling step, and Emma and I rolled all the cookie balls at once. We just put them on a plate, and they were ready and waiting to pop onto the cookie sheet. Much less wasted time between batches. I bet they would freeze beautifully as uncooked dough, rolled and ready to bake. I may have to try that next time.

When we tried one each from the first batch out of the oven, Emma didn't say much. When I asked her if she liked them, she was quiet for a minute, then said:

Yeahhhhhhhh...she heard the angels sing too ;)

Funny, seems I didn't even READ about a second chilling, let alone do it.

Martha has her moments, eh?